What is the impact of corona virus in the FM Market? Click here to find more.

Guarding Against Disruption – Synthesis Vs. Analysis 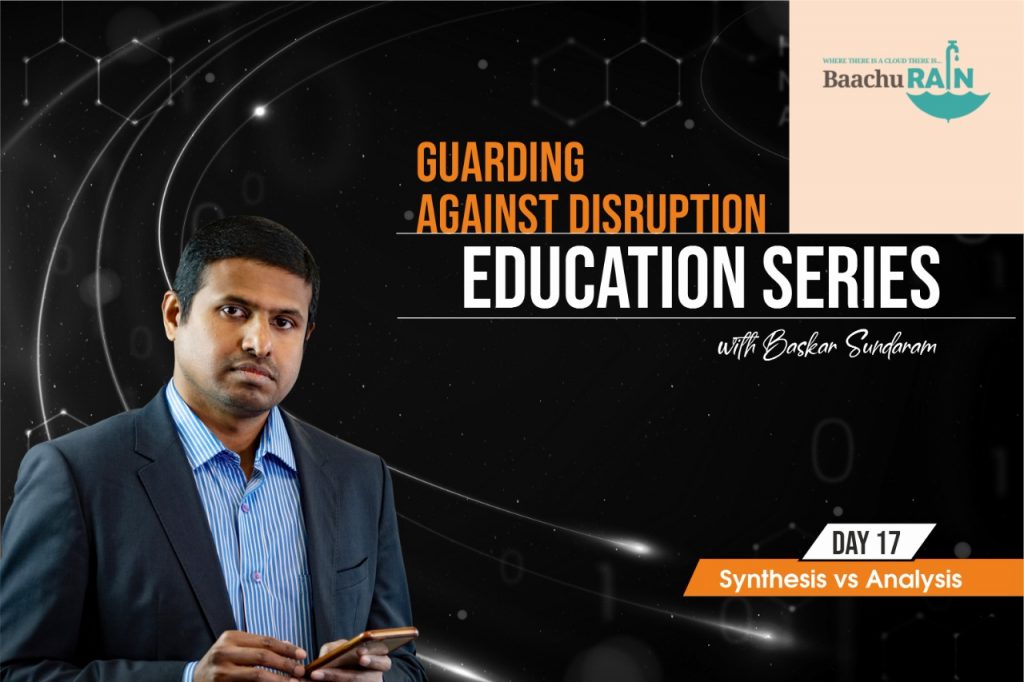 Synthesis and analysis play an important role in market and competitive intelligence (M/CI). But the two are often conflated, with damaging results for M/CI professionals. Today, we explore the key differences and share how you can free up more time to spend on highly valuable analysis.

About Synthesis vs. Analysis

As a general rule, technology can perform synthesis much more effectively than humans can and M/CI teams should deploy technology to perform synthesis. Making sense of the information gathered and how it impacts certain areas of the business or markets (aka analysis) is work best performed by talented, well-qualified M/CI professionals.

Drawing a clear line between synthesis and analysis also helps to better align expectations across the organization. Many times, stakeholders might think they want a synthesis, but what they really want is an analysis

But first, let’s start with definitions for both synthesis and analysis as they relate to competitive intelligence activities.

Synthesis is the process of combining simple things into something more complex in order to understand their shared qualities.

Analysis is the process of breaking down something into its basic parts to understand the nature, function or meaning of the relationships among the parts.
It is the understanding of the meaning that allows CI practitioners to create insights, intelligence, and knowledge.

It’s crucial to note that analysis can only be conducted by humans – not software. Too often, the makers of software programs or the latest technology claim that their product has the ability to conduct analysis. The reality is that today this just isn’t possible. Claims of non-human analysis are at best misleading and more likely fraudulent.

Synthesis vs. Analysis: Why Does It Matter?

To a layperson, these differences might seem trivial or a matter of semantics, but nothing could be further from the truth. Understanding this distinction is actually crucially important in helping competitive intelligence practitioners to educate their end customers. These end customers likely belong to a variety of departments or business units scattered around the organization, and consume M/CI insights to help them make better decisions. It’s fair to say that many end users' understanding of M/CI is rudimentary at best.

Consumers of competitive intelligence should understand that analysis isn’t just something that happens with technology. Meaningful analysis requires a great deal of work to be performed by humans, and it’s important to recognize that this work takes time.
Yes, it’s possible to summarize information quickly. But analysing information and transforming it into something valuable with context and meaning for your organization takes time.

What is Summarizing Information?

Summarizing is the process of reducing information to its essence or major points, and then stating these points in a concise, easy-to-understand format.

Drawing a clear line between synthesis and analysis also helps to better align expectations across the organization. Many times, stakeholders might think they want a synthesis, but what they really want is an analysis. Let’s look at a quick example:

The leader of a sales organization reaches out to the M/CI team and asks for a report with the ten most recent deals that the sales team lost to a major competitor. This is a synthesis, and while the  report does have value, it probably doesn’t provide any particularly meaningful information or helpful insights. In reality, what the sales leader likely wants to know is Why their team lost those deals. Uncovering insights in this area requires an analysis of the data involved. This analysis report will certainly provide greater insights into the sales teams performance and will likely require more time to produce.

Making sure that the end users of competitive intelligence across the organization understand what they are asking for, and the work involved in delivering it, enables the M/CI team to serve end users much more effectively.

Technology for Synthesis, Humans for Analysis

Another helpful way to think about the distinction between synthesis and analysis is the way in which the work is completed.

Today, the level of data that M/CI teams have access to continues to grow rapidly, and shows no signs of letting up. Compounding that issue is the increasing diversity of the requests that flow into the M/CI team from across the organization.

As a general rule, technology can perform synthesis much more effectively than humans can and M/CI teams should deploy technology to perform synthesis. Making sense of the information gathered and how it impacts certain areas of the business or markets (aka analysis) is work best performed by talented, well-qualifies M/CI professionals. Take an example of an organization who want to track news about their competitors:

By setting up an automated monitoring tool that synthesizes competitor news, organizations can track news sources, social media platforms, and press releases for any news related to a set of pre-selected competitors. Any news will be pulled into a central platform, which will display all relevant news items in a real-time dashboard, email report, or some other format. This is far more efficient than relying on a human to track all these sources of information, and ensures key news items are never missed by the CI team.

Without software to assist M/CI teams overcome the deluge of data and inbound requests, it’s all too easy for even the most talented of M/CI professionals to get bogged down with low-value administrative tasks. Organizations should look to incorporate sophisticated M/CI software platforms that employ technologies like Natural Language Processing (NLP) and Artificial Intelligence (AI) to effectively source, tag, and categorize competitive intelligence data. A lack of software and infrastructure around M/CI efforts often leads organizations to enter a cycle of competitive intelligence failure, where the CI function fails to prove their value to the wider organization and is eventually shut down.

Stay ahead in a rapidly changing Facilities Management world.

P.S. Join 2000 of your peers. Subscribe to the Baachu FM Insider

Every Friday evening we'll send you a roundup of the best content and events from Baachu. Make sure you're ready for the week! Subscribe now.

LET US HELP YOU

Stay ahead in a rapidly changing Facilities Management world. Subscribe to Rain Insights, our weekly look at the critical FM trends and market intelligence

Please log in again. The login page will open in a new tab. After logging in you can close it and return to this page.